All genuine posts are welcomed and will be acknowledged. Please submit your first post by email to: dennis@denversrailroads.com

How could I forget about shorts?

Well I did. In my defense it has been two years since I last had to spend hours looking for a short, but still! As you can guess I went ahead and wired up all my feeders to the BUS wires and then surprise surprise it no work. Still lacking a memory of shorts I unwired all the feeders and still had a short. After some time with a continuity tester I remembered that the frogs on all Peco Electrofrog turnouts needed to be gapped or insulated. I had done some, but not all. Anyway after using my Dremel cutting wheel to make the missing gaps, all the shorts went away and I can now start again. This time I will test with my RRamp meter after every connection that everything is still OK.

At least I have finished wiring the 40 turnouts to the front of the layout. Now all I have to do is connect a whole load of accessory decoders and design the control panel for the switches and lights. It is already built. Then comes the fun part — coding a NCE Mini Panel.

But first I have to get the track wiring organised and test run some Locos. That should be fun, I hope.

Donkey deep into wiring. I have 40 turnouts installed on just modules 1 & 1a and at least as many blocks requiring feeders and NCE BD-20 block detectors. Once all the block wiring and the accessory decoders are installed I plan to create a control panel with a diagram of the tracks and to install toggle switches and push-buttons to control the routes. The main line routes are going to be set using a NCE Mini Panel. For mainly economic reasons the industrial sidings, that do not require signalling, will use a central CDU (Capacitor Discharge Unit) and a diode matrix if necessary.

The following photos give an indication of where I am at with my wiring. Once finished I can start on building the industry kits and wiring up the temporary oval of track to enable test running and switching operations.

Finished tracklaying for Modules 1 & 1a

It does not look much but there is a lot of complicated track laid in these two modules. I decided to scrap the Kato test layout as it had passed its usefulness days and I will shortly lay a temporary oval of track on Module 5 so that I can have a loop to test Locos. Consequently I have reused most of the Kato turnouts and straight track on Module 1a. Speedup the tracklaying considerably. I like the simplicity of Kato turnouts. I replaced a damaged PECO scissors crossing with a Kato and was amazed to find that Kato regard the unit as just ONE turnout with a couple of wires. The PECO scissors crossing required 4 point motors and 2 expensive frog juicers.

The challenge of course is to ballast the Kato track so that it blends in with the Peco track and is not obviously “toy” looking. If I can succeed I may well use more Kato turnouts in the future. I will elaborate on my immediate track laying plans and some significant changes to Phase II in a future blog. 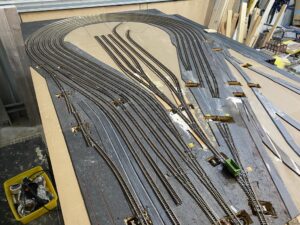 The holes have already been cut but it takes awhile to install the turnouts because I am re-cycling them, using the turnouts that were installed in modules 5 & 6. I am also using re-cycled track for the sidings, but not the main lines were I am installing brand new Peco code 80 track.

Ignoring all my tools covering module 1a the following photo shows modules 2 to 5 on the right and the Rio Grande Rocky Mountain area on the left. Initially only a temporary return loop will be installed between them. In time the loop will be converted to the Wye used to turn passenger trains so that they could back into Denver Union Terminal and a new D&RGW North Yard will be built. 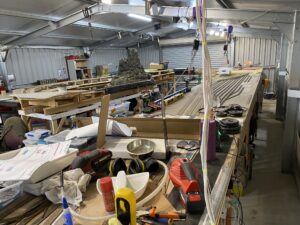 An overview of the entire layout can be found at https://denversrailroads.com/DPoverview.htm

Let’s get something finished . . . Continued

The current plan is to work only on modules 1 and 1a until they are both running well and scenic’d. Then to continue onto modules 2 to 5. This will include:

Then I can finish laying the track on modules 2 to 5 (the DUT tracks are already laid) and install dozens of station platforms. But that is a job for another day! Unlikely to be this year.

Change of Direction . . . Let’s get something finished!

Rather than continue “putting the layout back together” which really means lots more carpenter jobs I have decided to start to build the entire layout starting with Module 1, which already has 5 loops of track installed for the Joint Line return loop. 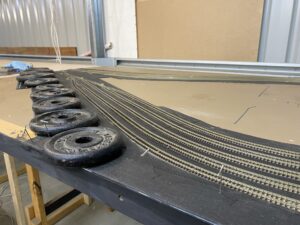 I have already started to lay new roadbed. I prefer cork but I found that I had a lot of Woodland Scenics foam trackbed left over and as it had already been used in this module I have used both foam and cork. 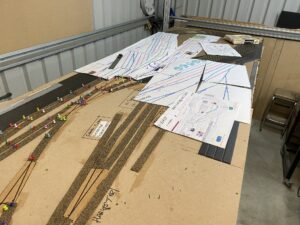 Putting the layout back together — Update #4

Rebuilt module 5a which completes the DUT coach yards and loco servicing. Used a 915mm continuous hinge and bolted it onto module 4. 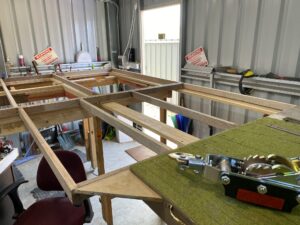 No idea if I am going to be able to winch modules 2, 3, 4 & 5a up as one unit. Will test shortly. Fastening the pull-along winches to the ceiling is a big job but the hardest part of the operation is getting the winches to release the wires after pulling up the modules so that they return to level bench-work. 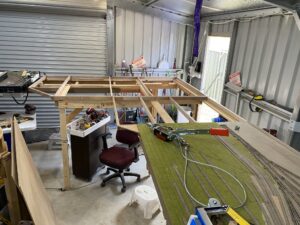 Finished the framing for modules 5b and 6a. After much thought have decided to use continuous hinges along the back 2.3m edge. It makes track and turnout wiring so much easier. The modules cannot be flipped once you add scenery and buildings but by then the track and turnouts should be well bedded in. 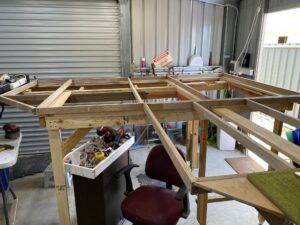 Just need to add plywood or MDF to the frames and it will be time to start laying track – at last.

Putting the layout back together — Update #3

Modules 1 & 1a bolted together and 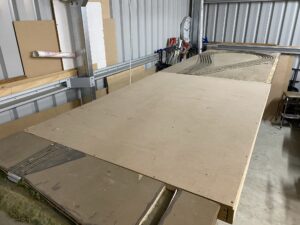 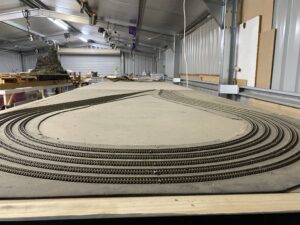 Connecting the L girder framework for modules 5 & 6 to module 4 is next on the list followed by the framing and the connection to module 7.

For an understanding of which module is which click here to view the trackplan.

Putting the layout back together — Update #2

Making good progress. All of the spotlights for Phase 1 have been installed together with 6 spotlights over my desk and the working area of the garage. As can be seen from the photographs all of the tools,  modeling parts, kits and scenery supplies have now been placed in plastic boxes on carts under the layout. All of the carts and furniture are on wheels. 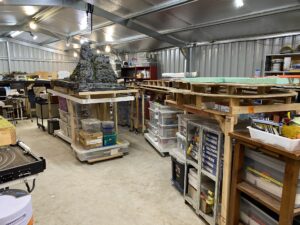 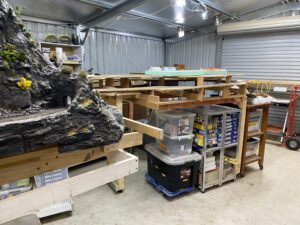 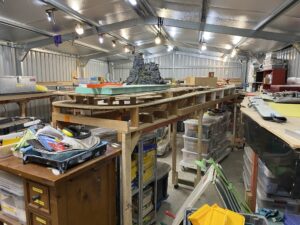 Time to start connecting all of the modules that make up Phase 1.

Putting the layout back together — Update #1

Soon after my last post in January we actually moved into our new home and began to shift all the boxes and furniture out of my garage and into the house. That is when the fun really started. At first I was busy moving into the house but when I came to work on the layout modules that we had moved from Townsville I ran up against all sorts of challenges, in particular adding longer replacement legs to the modules whose legs had been damaged in transit and adding complete new legs and  frameworks for two of the modules that had been shipped legless to sit on. I also decided that the section on which modules 5 & 6 were built needed to be rebuilt and as I have never been happy with my track-work on that section Ii removed all of the tack pending a re-build.

Then disaster struck. My largest module, made up of three 6 foot modules (Mods 2, 3 & 4) bolted together, fell over whilst i was adding a new leg. It took a whole week with 2 pull-along winches, 2 double pulleys and 2 car jacks to lift the module into the air and right it on its broken legs. A mess as can be seen by the first two pictures. The third picture shows the module on it’s new and stable legs and the forth, a picture of modules 11 & 12 on their new frameworks and legs. 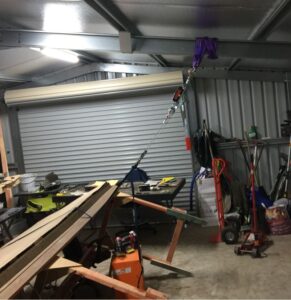 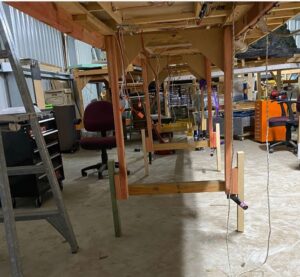 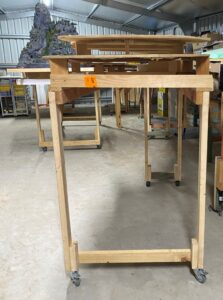 Speed matching was put on hold pending the big move. Unfortunately I did not put away all the locos and freight cars sitting on the test track layout . So to punish me for my carelessness the whole test track layout fell over as I was positioning modules 1 to 4 in place. After I finished crying I picked up all the loco and freight car bits and put it in one big box which I have yet to inspect. I am not looking forward to finding out what a mess my brand new Atlas GP-30’s are in. The lid of the control panel of the test track layout was also broken off its hinges.

I considered breaking up the Kato test track but on checking my CADRail drawings I realised that it could fit onto the module 6b L-girder framework as a temporary part of the re-build of modules 5 & 6. As the track-laying for modules 6a & 6b are part of Phase 2 of the layout, that will not be started for a year or three, so in the meantime the test layout could be well used for loco testing. A modified part of the track-plan follows. To see details of the three phases of construction check out https://denversrailroads.com/DPoverview.htm.

As can be seen, with a minor alteration a connection can be made between the Kato test layout and the main layout. This could be used as a convenience to move trains between the layouts or the test track could be operated as the Leadville branch of Denver’s RailRoads, as it was originally designed.

As of the date of this blog all of the modules are now in place but I still have the following woodworking jobs to complete:

I can then start the track-laying for Phase 1.  To understand which module is which check out the track plan at https://denversrailroads.com/Denver/DR-Layout/DR127A3.pdf.